Western Farm Press published an article May 18 about the need for inter-agency collaboration to improve California food safety and water quality. The article was an outgrowth of a three-day San Luis Obispo meeting in April: The Coordinated Management of Water Quality and Food Safety Conference.

"More than 100 leaders in water quality and food safety from thoughout the nation gathered to develop strategies to protect both the environment and fresh produce," wrote the article's unnamed author.

"The value in each person striving to connect beyond their current sphere of influence cannot be underestimated," Bianchi is quoted.

The article said there were 4 conference organizers, 13 planning partners and 7 government agencies that sent representatives.

A reporter at the Arizona Republic turned to UC experts for a story on oleander leaf scorch, a disease that has killed many of California's oleander plants and is now wreaking havoc in Arizona. In California it is the glassy-winged sharpshooter that is spreading the virus Xylella fastidiosa, which causes oleander leaf scorch in oleanders plus Pierce's disease in grapes. In Arizona the culprit is the smoke tree sharpshooter.

Oleander leaf scorch begins with yellow margins or spots on the leaves before the edges and tips take on a scorched appearance.

"Right now, it's pretty hard to find a healthy oleander anywhere in Riverside. I used to have them in my own backyard," said UC Riverside entomologist Matthew Blua, as quoted by John Faherty in the Republic article.

UC Berkeley professor emeritus Alexander Purcell told the paper that there is no cure.

"I wish I could give you some words of wisdom or encouragement, but there is nothing we can do. With no expectation of recovery, you may as well remove the plants sooner than later."

The health advocacy group Center for Science in the Public Interest issued a press release May 16 announcing that it filed a lawsuit against Burger King because it is the only leading restaurant chain that had not yet committed to eliminating trans fats from its menu. Indeed, media have been reporting on trans fat bans on a regular basis. This week, Applebees, Hooters and Starbucks all announced their plans to remove trans fat from the foods they serve, according to various media outlets. and were the first cities to pass laws getting trans fat out of restaurants. According to media reports, the Montgomery County Council in on May 15 unanimously passed a resolution to ban the use of trans fats in most foods served in local restaurants and in prepared food at supermarkets.

These developments would be applauded by Sheri Zidenberg-Cherr and Anna Jones, editors of Nutrition Perspectives, a bimonthly newsletter from the UC Davis Department of Nutrition. (Back issues are online. Current issues are only available to subscribers in hard copy form.) An article in the March/April 2007 edition provides objective, scientific information about trans fatty acids and their effect on cardiovascular disease risk. In short, the article says people should not eat trans fat and they should not substitute unhealthy saturated fat for the trans fat in their diets. 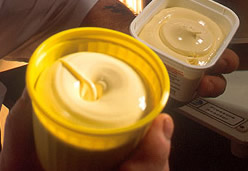 A jury in Bakersfield this week found Vincent Brothers guilty of five counts of murder. The story was widely covered in the media. Here is the report from KGET Channel 17. You might be wondering what this has to do with UC Agricuture and Natural Resources news. One of the 137 witnesses in the landmark trial was UC Davis entomology professor Lynn Kimsey.

Brothers claimed he couldn't have killed his family in Bakersfield on July 4, 2003, because he was in Ohio at the time and traveled in a rental car to Missouri the day before the prosecution said the murders took place. Kimsey examined the rental car's radiator, air filter and other bug samples collected by detectives. According to an April 2, 2007, article in the Bakersfield Californian by Jessica Logan, Kimsey found a species of paper wasp, two species of true bugs and a very distinctiive grasshopper leg. "The bugs would be splattered on Brothers car if he drove one of two major routes between Ohio and California," Kimsey testified, according to the Bakersfield Californian. No butterflies were found on the car, which indicated the car may not have been driven during the day. "The car did have several moth pieces on it and other night flying bugs, indicating it was likely driven at night," the newspaper reported Kimsey testified.

At the trial, Kimsey said she based her testimony on the 7 million bug collection at the R.M. Bohart Museum of Entomology at UC Davis, on consultation with other experts and published papers. 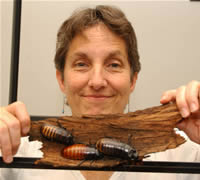 I love living in the San Joaquin Valley. Almost year-round you can find roadside stands with "farm-fresh" fruit in season. A recent edition of the Agricultural Communications Documentation Center's newsletter quoted a writer, Thomas Semon, who believes the phrase "farm fresh" is helping debase the English language.

"The phrase 'farm fresh' is part of a long-established practice of advertisers to use language that doesn't really mean what it says but sounds good, and is not specific enough to be clearly deceptive," he says.

In my usage of the term in the first sentence, however, 'farm fresh' does really mean what it says. In the valley, the first roadside stands to open in the spring sell the best strawberries you have ever tasted. Close on strawberries' heels come cherries. According to a story in the Stockton Record yesterday, a strong supply of the delicious tree fruit will be soon be sold on valley roadsides.

Reporter Reed Fujii went to UC Cooperative Extension farm advisor Joe Grant for his opinion on the 2007 cherry crop. "My sense of what's going on around here is it depends on what orchard you're in," he was quoted in the article. There's orchards with light to very-light crops, and then there's orchards with very heavy crops." Grant continued: "I'd be concerned in some of the heavier orchards being able to size well. Some of these overset orchards, if they are small, it could be tough sledding as far as sales goes."

Speaking of healthful fruit, the annual Blueberry Field Day and Tasting is held at the UC Kearney Research and Extension Center today.