Rising temperatures appear to be reducing the number of hours tree crops in the San Joaquin Valley are subjected to chill during the winter, a critical factor in producing a profitable yield, reported Ezra David Romero on Valley Public Radio, KVPR-FM.

Pistachios, for example, require temperatures between 32 and 45 degrees for about 700 hours each winter, but for the past four years have had less than 500 chill hours.

UC Davis researcher Hyunok Lee recently published a study about climate change impacts on agriculture in UC Agriculture and Natural Resources' peer-reviewed journal California Agriculture. The study found that winter temperatures are increasing more than any other time of year. Her modeling looks at the year 2050 in Yolo County.

“Our agriculture will continue,” Lee said. “But if you look at . . . like 20 years or 30 years. The pattern may change a little bit, crops may move a little bit north.” Insufficient chill hours can delay the opening of leaf and flower buds in crops such as walnuts, which may result in a smaller yield. (Photo: Will Suckow))

"We're trying to use the other species of pistachios actually to see if we can come up with something that has a low chill requirement. It's pretty hypothetical at this stage,” Kallsen told Romero. “We made quite a few crosses this spring and we actually hope to put a trial in a low chill area.”

David Doll, UC Cooperative Extension farm advisor in Merced County, is studying other tactics to improve winter chill, such as using overhead sprinklers to cool the trees and painting them white with liquid clay to reflect sunlight.

"So this is something that could impact a lot of farmers over the next 10, 20, 30 to 40 years,” Doll said. “And in fact it's already impacting farmers on random given years across the state." UC Cooperative Extension's nutrition education programs were the feature of freelance writer Don Curlee's "Ag At Large" column last week. The column appears in a variety of publications, including the Hanford Sentinel, the Stockton Record, the (Sutter-Yuba) Appeal Democrat and Capital Press.

The column was prompted by the January-March issue of California Agriculture journal, a special issue focusing on "Healthy Families and Communities." In the opening editorial, former California Superintendent of Public Instruction Delaine Eastin said the state is facing a crisis in the health and education of its young people, Curlee reported.

“The challenges include high childhood obesity, rising school dropout rates and low student achievement, especially in the sciences," Eastin said. “Healthy families and children are vital to our nation and its prosperous future. It is time that key players in higher education join in a project to promote the general welfare by focusing on measurable scientific initiatives we can pursue to ensure the blessings of liberty to our posterity.”

Agriculture is a key industry in Merced County, contributing nearly $3 billion per year to the local economy, but city dwellers living next door find it's not all tranquility and charm, according to an article in the Merced Sun Star.

The story was based on a research report in the most recent California Agriculture journal, "California communities deal with conflict and adjustment at the urban edge," which focused on the confluence of agriculture and neighborhoods in Merced and Monterey counties.

UC Cooperative Extension farm advisor Maxwell Norton, one of the study's authors, told reporter Carol Reiter that the research involved interviews and the tracking of urban-agriculture complaints to agricultural commissioners. Most complaints from urban residents are about aerial spraying, night noise and dust.

"In Los Banos people seem to be very sensitive to planes flying over their homes," Norton was quoted. "They automatically think if it's a small plane, it's an ag plane."

The study also looked into reasons for varying levels of urban/ag conflict in different localities.


"We found that the population of Los Banos is fundamentally different from the population in Livingston," Norton said. "In Los Banos, there are a lot of truly urban people, Bay Area transplants who are commuting. They did not grow up around ag."

Norton said farmers have learned to tread lightly when it comes to getting along with their neighbors.

"They try to avoid tractoring or spraying in the afternoons when children are home," Norton was quoted "And there are some crops they avoid growing near urban areas, like cotton."

Keeping urban areas as compact as possible will help ease conflicts as the valley's population grows, the authors suggested in the California Agriculture article.

"There are many more residents now scattered throughout the rural areas," Norton said. "It's become increasingly difficult to have a buffer between the farms and residential areas." 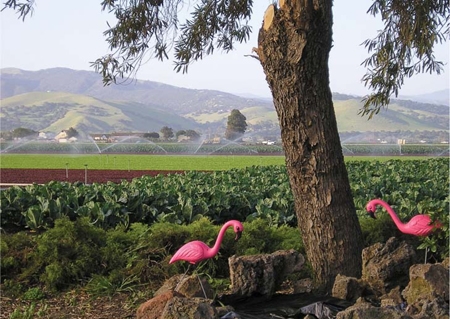