Celeste Harrison with her prize-winning chocoflan dessert. (Photo by Kathy Keatley Garvey)
From cavies to chili to chocoflan...

Thirteen-year-old Celeste Harrison, a fourth-year member of the Sherwood Forest 4-H Club, Vallejo, shares her expertise about chili and cavies (guinea pigs), but she's also a pro in the kitchen and at making a dessert called “Chocoflan.”

The chocolate dessert recipe originates “from my Great-Aunt Esther and it's what we serve at all our family gatherings,” she said.

It's a winning one, at that. And just in time for Valentine's Day.

Celeste baked the dessert for the recent Solano County 4-H Project Skills Day — where 4-H'ers share what they're learned in their projects — and her presentation and recipe earned a showmanship award, one of seven awarded.

Last year she won a showmanship pin for her project, “Curls Just Want to Have Fun: How to Care for Your Curly Haired Guinea Pig.”

Celeste, a seventh-grader is active in 4-H. She serves as the treasurer of her 4-H club and last year served as a Science, Engineering and Technology (SET) officer in the Solano County 4-H Program. This year she's enrolled in five projects: cavies, poultry, dogs, record keeping and rabbits.

Always eager to learn, Celeste decided to “take dogs, rabbits and poultry so I can learn showmanship,” she said, noting that she competed in the Round Robin Small Animal Showmanship at two county fairs last year but was inexperienced at showing animals other than cavies. So this year's she's set her sights on learning more about them. Her goal: to place first in Round Robin.

No stranger to the kitchen, Celeste served as a member of the Sherwood Forest 4-H Club's Chili Cook-Off team for the last two years in the Solano County 4-H Project Skills Day.

This year, however, she turned from chili to chocoflan. The evaluators loved it! So did the 4-H'ers and their families who sampled it.

A bundt pan, deep roasting pan, blender, large bowl and a hand mixer are needed for this recipe.

Ingredients for flan:
A 14-ounce can of sweetened condensed milk
A 7.6-ounce can of Media Crema (light cream)
2 teaspoons vanilla extract
8 ounces of cream cheese
5 eggs

Directions:
Put an oven rack in the middle of the oven and preheat to 350 degrees. Coat a bundt pan with cooking oil spray.

Sift flour, salt, baking powder and baking soda in a large bowl. In a separate bowl, combine eggs, milk, vegetable oil, vanilla and cocoa mixture and beat with a hand mixer for two minutes. Add the wet mixture in increments of one cup into flour mixture until thoroughly combined. Stir cocoa powder into hot water until melted and then stir into cake mix and set aside.

In a blender, add in all flan ingredients and blend on high until smooth. Pour cake batter into a bundt pan (make sure surface is level). Pour flan mixture into the cake batter but do not mix (it will sink to the bottom of the bundt pan while in the oven).

Put chocoflan into a large roasting pan and fill the pan with about 2 inches of warm water. Spray a piece of aluminum foil with cooking spray and set it on top of the bundt pan (but do not fold it over the bundt pan.) Bake for one hour and 45 minutes. Remove cake from oven and let cool before inverting it onto a serving platter. Enjoy.

Solano County 4-H Program
The Solano County 4-H Youth Development Program, part of the UC Cooperative Extension Program, follows the motto, “Making the Best Better.” 4-H, which stands for head, heart, health and hands, is open to youths ages 5 to 19.  In age-appropriate projects, they learn skills through hands-on learning in projects ranging from arts and crafts, computers and leadership to dog care, poultry, rabbits and woodworking. They develop skills they would otherwise not attain at home or in public or private schools. For more information about Solano County 4-H, contact 4-H program representative Valerie Williams at vawilliams@ucanr.edu. And it's just in time for Super Bowl Sunday on Feb. 4 when the New England Patriots square off in Minneapolis, Minn., with the Philadelphia Eagles. The siblings competed last year as the “Mean Green Machines,” wearing their official green and white 4-H uniforms and hats. This year they chose the same recipe but adjusted its heat. They also donned different 4-H attire along with white chef hats, inscribed with their names.

They answered questions from the evaluators and served them samples. John Vasquez Jr. of Vacaville, member of the Solano County Board of Supervisors, judged the chili contest with Vacaville police officers Jeremy Johnson, Shawn Windham and Steve Moore. Windham is also the president of the Vacaville Unified School District Board of Trustees. The evaluators all described the chili dishes as delicious, said coordinator Kelli Mummert, a community leader in the Pleasants Valley 4-H Club, Vacaville.

"The Chili Cook Off is a great hands-on opportunity for youth to build confidence and spark their creativity," said Valerie Williams, Solano County 4-H Program representative. " Chili team members build food preparation skills, learn food and kitchen safety, and use math and science concepts, as they develop their chili recipes."

Each member of the winning team received a $15 Cold Stone Creamery gift certificate.

“I would have to say that I was extremely impressed with all of the teams and their entries in the contest,” said Windham. “While there was one clear winner of the contest, every one of the teams made a very good chili and showed that they have a strong ability to work together as a team collaboratively and that they have very strong cooking skills.”

“I think all of the teams showed maturity and had a great presentation for their chili,” Windham said. “They were each very enthusiastic about their creation. I found all of the chilis to be very good and I thought the teams did an excellent job of representing 4-H. I was also very pleased we were able to host the event at one of our Vacaville Unified School District  schools.” Windham added: “I will be honest in that I wasn't sure what to expect because I haven't been involved with the chili contest before. However, I was very pleasantly surprised and really enjoyed each of the teams' creations and the ability to talk with the kids about how they came up with the recipes for their chili.  It is a lot of fun and I hope to get an invite again next year!”

Said Vasquez: "I believe  this year's winning chili had all the qualities that a winning chili should have: flavor, aroma, texture, color and presentation. I enjoyed having three police officers from the Vacaville PD this year as judges. Their skills in remembering in great detail made the job of judging much easier, as we refer back to our notes on each one of the entries. I've had the honor of attending as a judge and as a presenter of awards on both Project Skills Day and the 4-H Achievement Night for 16 years. Over the years, Shelli  (his wife) and I have watched young 4-H'ers grow to become young, impressive adults and that has been rewarding to us.”

Moore said all the team members were "polite, professional and knowledgeable for their age group. While the consensus was one winner, I feel that each team presented a good product. For me, it was my first time attending a 4-H-sponsored event and I was very impressed." He is interested in involving his two sons in 4-H.

The other participants of the cookoff: Here's the winning recipe, heralding the green and the white:

Cornstarch for thickening if needed

Directions: In a large stock pot, brown pork in the olive oil. Add the ground sausage and continue cooking over high heat until meat is browned (about 30 minutes). Add the water and seasonings. Cook an additional 30 minutes. Add green enchilada sauce. Turn heat down and simmer for 30 minutes. While mixture is simmering, coarsely chop the onions, mince the garlic, dice the peppers and tomatillos and chop the cilantro. Add these to the pot and continue cooking until the pork is tender (about 30 to 45 minutes). Check flavor and adjust seasonings to taste. If needed, thicken with the cornstarch.

The Dixon Ridge,  Tremont, Pleasants Valley, Rio Vista and Sherwood Forest 4-H Clubs are among the 12 clubs in Solano County. The others are Maine Prairie 4-H, Roving Clovers 4-H, both of Dixon; Elmira 4-H, Vaca Valley 4-H, both of the Vacaville area; Westwind 4-H and Suisun Valley 4-H,  both of Fairfield-Suisun; and Travis Air Force Base 4-H Club from Travis. The Solano County 4-H Youth Development Program is part of the UC Cooperative Extension Program.  The four H's stands for head, heart, health and hands, with the motto “Make the Best Better.” 4-H is open to all youths ages 5 to 19.  In age-appropriate projects, they learn skills through hands-on learning in projects ranging from arts and crafts, computers and leadership to dog care, poultry, rabbits and woodworking. They develop skills they would otherwise not attain at home or in public or private schools. For more information, contact Solano County 4-H Program representative Valerie Williams at vawilliams@ucanr.edu  or link to http://solano4h.ucanr.edu/Get_Involved/.

No chill in these chili dishes

When Solano County 4-H’ers compete in their annual Chili Cookoff, part of the countywide Project Skills Day, the competition is as fierce as some of the hot peppers. This year’s cookoff was no different.

When it was all over but the tasting, the “Beanless Babes Do Beans,” a duo from the Maine Prairie 4-H Club, Dixon,  won the championship, followed by “The Golden Spice Girls,” a trio from the Tremont 4-H Club, Dixon.

Both teams provided unusual recipes: the Beanless Babes opted for elk burger instead of the traditional beef and named their chili, “Hunter’s Chili.” The Golden Spice Girls used beer, chocolate, coffee and sugar in their chili, naming it “Bad Character Chili.” The Tremont 4-H’ers derived the name from a great-grandmother who used to refer to folks who indulged too much as “bad characters.”

Judges proclaimed both dishes as delicious, but especially the Beanless Babes' dish made by Lauren Kett and Rebecca Ivanusich.

“It was really good,” said judge Jim Baumann, owner of The Point Restaurant, Rio Vista. Fellow judges Trish San Nicolas of the Golden Hills 4-H Club, Vacaville, and Jose Topete of the U.S. Coast Guard, based in Rio Vista, agreed. They said they were impressed with the taste, creativity and presentation.

The recipe was based on a recipe published by the North American Hunting Club. “This was the first time we made it,” said Rebecca. Lauren's father provided the elk burger.

In a large pot, cook onions, garlic and meat until brown. Add beer and stir over medium heat for 3 minutes. Add espresso, brown sugar and tomato paste. Stir in cocoa, soup mix and spices. Stir in one can of kidney beans, tomatoes and green chilies. Reduce heat and simmer for 1-1/2 hours, stir occasionally. Add flavored coffee and one can of kidney beans. Reduce heat and simmer for 1/2 hour, stir occasionally. Optional toppings: fried onions and sour cream. Serves 6 to 8. 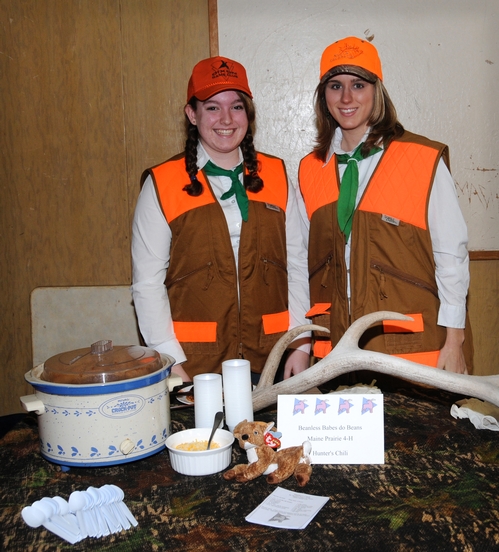 They won with hunter's chili 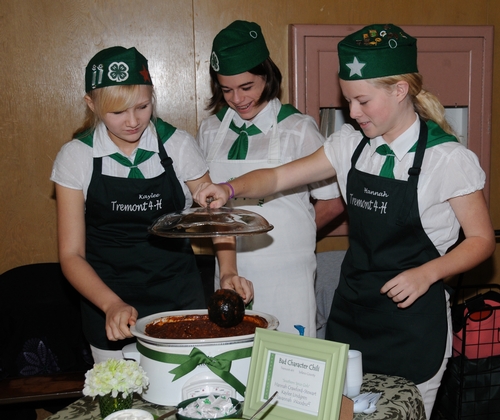