Invasive pest takes up residence in the Northeast Spotted lanternfly. (Photo: Wikimedia Commons)
The spotted lanternfly, native to Asia, first came to America in 2014 when it was found in Pennsylvania. Despite a quarantine, populations have been discovered in New York, Delaware and Virginia, reported Zach Montague in the New York Times.

“They've been appearing in grapes, and we have reports from growers last year of a 90 percent loss,” said Julie Urban, a senior research associate at Penn State.

The reporter also contacted UC Cooperative Extension advisor Surendra Dara, who published an article in 2014 about spotted lanternfly in Pest News, a UC Agriculture and Natural Resources eJournal about endemic and invasive pests in California. Surendra Dara.
"The Pennsylvania Department of Agriculture recently reported the first detection of yet another invasive hemipteran pest in the U.S.," Dara wrote in his article. "While efforts to have a good grip over other invasive hemipterans like the Asian citrus psyllid, the Bagrada bug, and the brown marmorated stink bug are still underway, there is a new pest that could potentially impact industries ranging from lumber to wine."

Dara told Times' reporter that lanternfly has the unusual ability to lay eggs on almost any surface — plants and soil as well as wheel wells, train cars and shipping containers.

“Most pests deposit their eggs on their host plant, or very close, so they already have food available,” Dara said. “Those that have the advantage of being able to lay eggs on non-plant material obviously have a better chance of surviving and spreading." Biologists believe a high volume of water flowing through the Los Angeles River this winter due to El Niño rain will favor native fish, reported Louis Sahagun in the Los Angeles Times. Native species - who evolved in river systems prone to sudden torrents of water, mud, bolders and debris in winter and pools and damp patches in summer - main gain an edge when the river rages.

Currently, the fish population in the river is almost entirely non-native. Released as bait by anglers, dumped by the city to eat unwelcome species, and aquarium fish set free by their owners now populate the river's waters.

The forecast heavy rains during the 2015-16 winter present an opportunity to determine whether nonnative fish will be washed out of the river and into the Pacific Ocean, giving native fish a new chance to become established.

"If we are ever going to fully understand the ecology of this river, and prospects for the return of species that evolved in it, we have to know first what's in it now, and how well those creatures do in extreme conditions," said biologist Rosi Dagit of the Resource Conservation District.

UC Cooperative Extension natural resources advisor Sabrina Drill was among a group of biologists and volunteers who surveyed the fish in the river in late November with seines, dip nets and rods and reels. After six hours, the team caught about 3,000 talapia, two dozen crayfish, a few hundred mosquito fish, one aquarium species and two Asian freshwater clams.

The research is funded by the Friends of the Los Angeles River. The agony of the oaks

It was identified in the Golden State in 2006 and to date has besieged coast live oak, California black oak and canyon live oak, according to an article in the December 2009 issue of UC's Oaks 'n' Folks newsletter written by Doug McCreary, UC Berkeley Cooperative Extension natural resources specialist. So far, more than 17,000 oaks have succumbed to the borer.

Unlike pests that target weakened or stressed trees, the GSOB (also called "Golden SOB" by some, according to McCreary) attacks large, vigorous and healthy trees, including those in urban yards.

"We are turning a big crank on this bug right now," the Press-Enterprise article quoted Mark Hoddle, an entomologist and director of UC Riverside's Center for Invasive Species Research. "Can you imagine Southern California without oak trees? It would be a disaster."

Even more alarming, officials believe the pest's range in California will likely expand. It's progress can be slowed with the public's help. The Press-Enterprise published the following tips for stemming the spread of GSOB:

The UCR Center for Invasive Species has created a Web page with information about and photos of GSOB and damage caused by the pest.

In addition, a two-page Pest Note on gold spotted oak borer, with 14 color photos, may be downloaded from the Web. 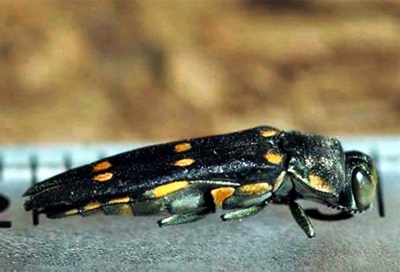 The Invasive Species Council of California has apointed a 24-member advisory committee that includes a diversity of environmental and agricultural experts, including two UC agriculture and natural resources scientists, according to a news release issued yesterday by CDFA.

The UC advisory board members are:

In addition, the board includes representatives from the Citrus Research Board, the U.S. Forest Service, the Natural Resources Defense Council, the Nature Conservancy, the California Farm Bureau Federation and many other agencies.

California ag secretary A.G. Kawamura said the 24 founding advisory board members have a challenging task ahead of them.

“They will lay the groundwork that will enable this council to enhance our collective ability to protect California’s environment, food systems, human health and economy from invasive and destructive pests, plants and diseases," the release quoted Kawamura.

The release was picked up today in the Salinas Californian, the Imperial Valley News, and Lake County News. 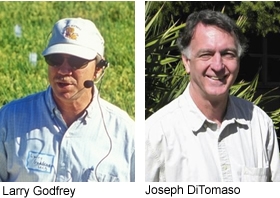 UC members of the ISCC advisory board.