Developing a community garden in Novato is proving more complicated and costly than expected, but local organizers are pressing forward with their plans, according to an article in the Marin Independent Journal.

The garden, which will contain 50 to 80 garden plots, is proposed by the non-profit organization Novato Live Well Network. Initially, the group thought expenses for the project would amount to $25,000. However, the price tag has swelled to $220,000 to $250,000.

Reasons cited in the article for increased costs include:

Project supporters say the community garden would allow Novato residents to grow their own food and make better nutritional choices. A percentage of plots will be offered to low- or moderate-income households, and plot fees will be charged on a sliding scale.

"Community gardens open up the opportunity for community members to garden, and improve health factors, making them more active and getting them to eat more fruits and vegetables," the story quoted Mark Bauermeister, the UC Cooperative Extension Master Gardener coordinator in Marin County. "If they're managed correctly, they can be beneficial for the environment, encourage community interaction and beautify the neighborhood." 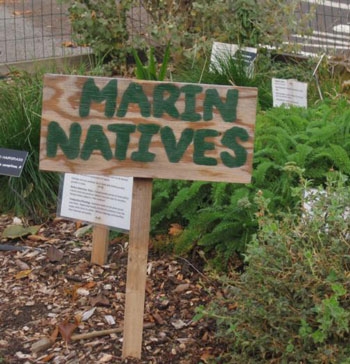 A delegation from China's Ministry of Agriculture visited a Marin County ranch on Wednesday to view a collaborative research project aimed at sequestering carbon in rangeland. The visit was covered by Contra Costa Times reporter Mark Prado.

The research collaborators, which includes UC Cooperative Extension, are studying whether application of compost on rangeland will boost plant growth, which in turn would store more carbon. Research leader UC Berkeley professor Whendee Silver shared with the delegation promising early results gleaned from the first year of the five-year project.

"Plants are pulling carbon out of the atmosphere and ... they put it below ground into soils, into their root systems," Silver was quoted in the story. "You can see that our experimental plot is much greener than the control plot. We grew much more grasses by adding compost."

The Chinese visitors' interpreter, Charles Han, told the reporter the visitors wanted to learn more about the process, according to the article.

"They are very interested in land and grass issues," Han was quoted. "We have a lot of land in China."

More information is on the Marin Carbon Project Web site. 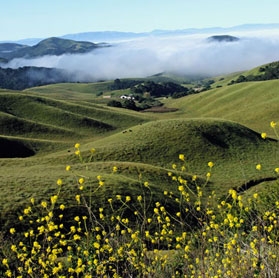 Rangeland owners may be able to sequester more carbon on their land.