(The Sacramento Bee published an op-ed by Rachel Surls, UC ANR urban agriculture advisor for Cooperative Extension in Los Angeles County, in its editorial pages today. The op-ed is reprinted below.) A potential solution to hunger and food insecurity is growing vegetables in backyards and vacant lots, says Rachel Surls, UC ANR urban agriculture advisor.
Urban agriculture is in the local spotlight as the Sacramento City Council is expected to vote Tuesday night on allowing farming on city lots and making it easier for residents to sell produce they have grown.

In similar discussions around the state on the desire of residents to raise their own food with fewer restrictions, there is a core issue that should be front and center. In California, where we grow half of the country's fruits and vegetables, our own citizens too often go hungry.

Fifteen percent of households – roughly 5.5 million Californians – are “food insecure,” according to a 2013 federal report, meaning they do not have “consistent access throughout the year to adequate food for healthy active living.” Families with children are even more likely to run short on food.

We know that eating plenty of fruits and vegetables is key to a healthy diet, but not everyone has ready access to a grocery store, or can afford to buy fresh produce. One potential solution is to make it easier to grow food in backyards and on vacant land.

The University of California's Global Food Initiative aims to help the world sustainably and nutritiously feed itself. One way that UC Agriculture and Natural Resources is working toward that goal is by providing information for urban farmers and decision-makers interested in urban agriculture to improve food security in their communities. While hunger and food security are complex issues, urban farming can be used with other strategies to help ensure access to affordable, nutritious food.

And the idea seems to resonate with Californians. Interest in urban food production can be seen around California. Following strong advocacy efforts at the grassroots level, Assembly Bill 551 was passed in 2013, allowing local governments to designate urban agriculture incentive zones. San Francisco has enacted the state's first one.

Several other cities have developed local policies to promote urban agriculture. San Diego, for example, has made it easier for residents to keep chickens and bees in their backyards, and to establish farmers markets, produce stands, community gardens and small urban farms. Oakland updated its city code in 2014 to allow community gardens in most of the city without a special permit.

But obstacles to urban agriculture remain in many cities, including land use restrictions, difficulty accessing water, soil contamination and a lack of information on local regulations. After conducting a statewide study, my colleagues and I found a number of common challenges and came up with six steps that local officials can take to break down common barriers.

They are: Make zoning and regulatory information accessible; develop a transparent process for using city-owned land; create an urban agriculture incentive zone; update zoning to make it urban-ag-friendly; make water accessible while promoting efficient use; and provide guidance and support for soil testing and remediation.

An easy way to let urban farmers know what is allowed is to post information on a website, as San Francisco has done. Through AB 551, cities can entice property owners to lease their land for gardens and farms in exchange for reduced property taxes. Cities can also partner with urban farmers and local food policy councils to identify concerns and ways to address them.

In addition to health benefits, urban gardens beautify the community and provide common ground for people of different ages and cultures to work together. They can also create jobs, learning opportunities and economic savings on food. Given the numerous potential benefits, local officials can better serve their communities by making it easier to cultivate food locally. The City of Los Angeles has about 8,000 vacant lots, which potentially could be used for urban agriculture.
There is plenty of vacant land that could potentially be farmed in urban Los Angeles County, but there are hoops to jump before a hoe can rake through the earth, reported Rick Paulas in a Q&A article with UC Cooperative Extension advisor Rachel Surls, published on the KCET Food Rant blog.

"Sometimes, I think there's local elected officials who feel the highest use of that land is to build businesses that will create jobs," Surls said. "And although urban agriculture can sometimes create jobs, it has other community benefits that perhaps aren't entirely valued, like offering healthy food, beautifying the neighborhood. Oftentimes, neighborhoods get a Burger King on a piece of vacant land rather than a community garden."

Surls said beginning urban farmers at first need basic horticultural information - what to grow, when to plant, how to irrigate and how to manage pests. As they gain experience, they often encounter challenges there weren't aware of at first, such as regulatory or zoning issues.

"And if they stick around long enough," Surls said, "they get to a phase where they need more sophisticated production information, more marketing and business-oriented information, and advice on things like labor. How can I legally use volunteers? What are California labor laws? Just a lot of information that commercial farmers have been dealing with for a long time."

To help farmers at each of these stages, Surls developed a website for urban farmers that aggregates information and resources needed to start a new farm, work with city and county officials, and market their produce. "Chefs are using what's produced (in the garden) in their kitchens because they know their customers appreciate fresh, local food," said Rachel Surls, the sustainable food systems advisor for UC Cooperative Extension in Los Angeles County.

Surls was part of a recent tour of urban agriculture in downtown Los Angeles, a story that was also covered by the LA Times.

The visitors — who included growers, urban policymakers, consultants, entrepreneurs and representatives of nonprofits — wandered around the vegetable beds and asked questions as they got a taste of the garden. The article said the garden, on the fifth floor of a building at 6th and Figueroa streets, cost about $40,000 to build and yields as much as $150,000 worth of produce every year.

The California drought didn't impact the wine industry in 2014, but a dry forecast for next year has growers worried. One major issue is the buildup of salts in soils, said Mark Battany, UC Cooperative farm advisor in San Luis Obispo County. During a wet winter, these salts are washed away. But California hasn't had a wet winter in three years. Farmers were able to irrigate at the beginning of the drought to make up the difference, but increasingly water supplies are restricted.

Battany says that excess salt buildup in the soil can cause grapevines to lose their leaves. "Without a way to process sunlight, you won't see sugar ripening," he said.

Organic farmers are challenging a proposed California pest-management program they say enshrines a pesticide-heavy approach for decades to come, including compulsory spraying of organic crops at the state's discretion.

The farmers are concerned about the California Department of Food and Agriculture's pest-management plan, the article says. The 500-page document lays out its planned responses to the next wave of fruit flies, weevils, beetles, fungus or blight that threatens crops. Many groups challenging the plan complained that it seems to authorize state agriculture officials to launch pesticide treatments without first carrying out the currently standard separate environmental-impact review.

The article reported that the California organic agriculture industry grew by 54 percent between 2009 and 2012. California leads the nation in organic sales, according to statistics tracked by UC Cooperative Extension specialist Karen Klonsky, who says the state is responsible for roughly one-third of a national organic industry.

Will work for food

The Los Angeles Times today ran a compelling photo in its blog "Framework," which shares intriguing news images of the past, showing men collecting vegetables in payment for labor during the Great Depression. For information on such cooperatives, Framework directed readers to a blog post written by the director of UC Cooperative Extension in Los Angeles County, Rachel Surls, in June 2010.

Surls reported that many farmers were unable to harvest produce because they couldn’t afford labor, and enormous quantities of food were left in the fields as people went hungry. One response of Los Angeles County residents was to organize into “self-help cooperatives." Self-help cooperatives were based on bartering labor for goods, for example, harvesting farmer’s crops for a share of the harvest. 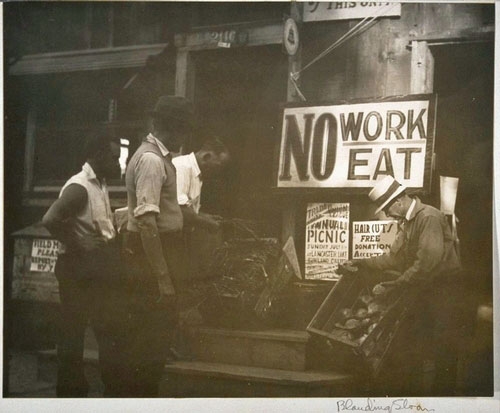 The public television station in Los Angeles, KCET, has produced a multi-media package on its website that delves into the unique circumstances of Richland Farms, an agricultural district in the heart of urban Los Angeles County.

The series, called Departures, is an oral history project that thoroughly explores neighborhoods through the people that live there. Director of UC Cooperative Extension in Los Angeles County Rachel Surls provided commentary in four online videos. She noted that LA County was the United States' top ag county until the 1950s

"It sort of dates back to the founding of Los Angeles when people first came and looked at Los Angeles as a potential site for a mission," Surls said. "They saw that it had great soil, they saw that things grew well here and they thought, 'ah ha, perfect place for farming.' So that's how it started."

Other industries have since become more important than farming in LA, but agriculture hasn't been erased. According to the website, when the city of Compton was formed in 1898 on land donated by Griffith D. Compton, he stipulated that certain acreage be zoned for agricultural purposes only. Large lots in what came to be known as Richland Farms enabled residents to grow food and tend livestock.

"It's like being out in the country, but you're right in the middle of this huge urban area," Surls said on the second video.

Today, interest in urban agriculture is growing. Surls said a survey found a 19 percent increase in home vegetable gardening between 2008 and 2009 and she attributes it to two things: the economy and a new way of thinking about the environment and nutrition.

"Even though we haven't been a huge agricultural producer since the 1950s, I'd like people to remember that food matters in Los Angeles."

Surls said she hopes UC Cooperative Extension can help reintegrate the practice of urban agriculture in communities such as Richland Farms and provide working "pilot" models for other communities across the county and throughout the state. The Departures website suggests visitors take a look at Surls' curation of links in her Twitter stream to see why.

Here are links to view Surl's four videos on Departures: 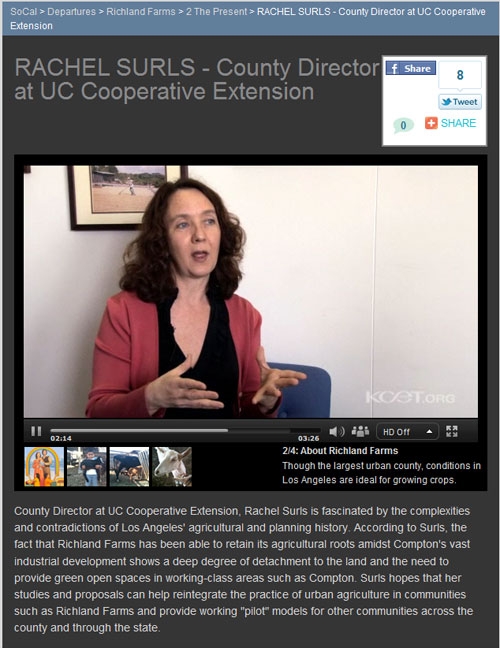